Stuff that in your pepper and smoke it. Or eat it. Whatever.

One of the things that happened to Drew and I when we became parents was a sudden hyper-awareness of the fact that we should be taking better care – of ourselves, the planet, of our fellow humans. While we have never really been slouches in that department - we have always tried to respect the environment as a whole and shop ethically - it has until now lacked the rather intense commitment that is now part of our lives. A purge is underway in our household, one that will hopefully leave us healthier people and make us better global citizens.

It began by signing up to two grocery delivery services: Mama Earth Organics, which delivers organic produce and other groceries weekly within the GTA, and a subscription to the Honest Company, a US company which delivers non-toxic, organic, plant-based household and personal care supplies on a monthly basis. A weekly trip to the Wychwood Barns farmer’s market, with occasional trips to Bulk Barn and our local Portuguese butcher shop round out our grocery needs. Let me tell you, there is REALLY something to be said for having most of your groceries delivered.

I dearly wish that I could grow more of my own produce, but a highly shaded yard in combination with my own brown thumbs means my few attempts at plant cultivation have never resulted in anything other than frustration, so this is one area I will leave to the professionals. I have way more luck with the cooking aspect of food preparation.

Cutting out major grocery chains has been freeing in a way I never anticipated – it forces one to be creative about menu planning, but has also led to me re-discovering my love of experimenting in the kitchen. I will be posting my most successful creations here – beginning with last night’s success story. 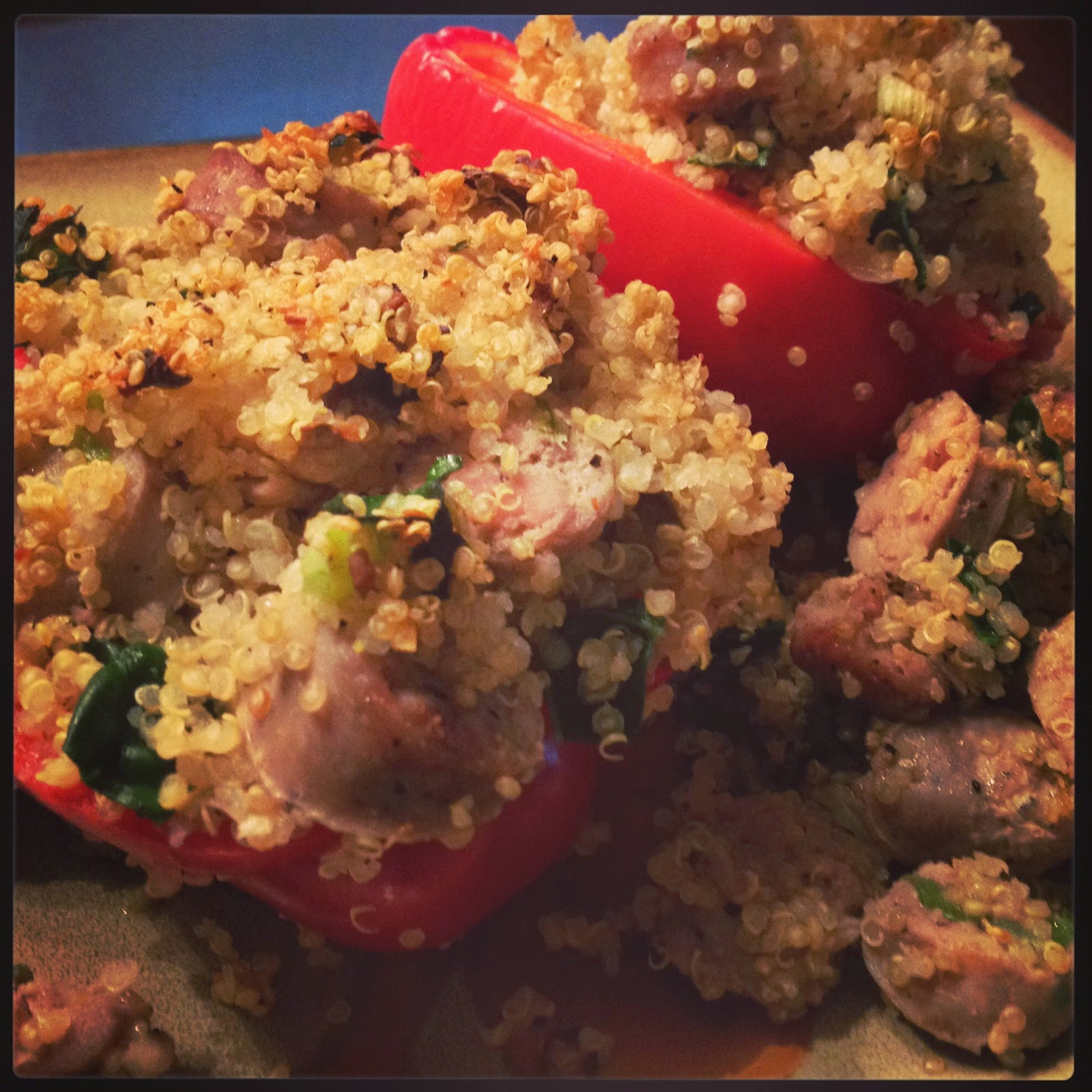 Begin by slicing each red pepper into two equal halves.  Remove seeds and membranes, and line the inside of each pepper with some crumbled feta cheese.

In a frying pan, heat the olive oil on medium heat until warm.   Add sausage and sautee until almost cooked through.  Remove from heat and chop sausage into rounds approx ¼” wide.  Return sausage to the pan.

Add the mushrooms, kale and onions to the pan.  Sautee until sausage is cooked through (about 5 minutes). Remove from heat and transfer to a bowl.  Toss in the Montreal steak spice and allow to cool for a few minutes.

In a saucepan, bring two cups of water to a boil.  Drop in the bay leaves and allow to steep for two minutes. Remove the bay leaves and discard. Add the quinoa and cook, uncovered and stirring occasionally, until the water is absorbed (around 10-15 minutes).

Add the quinoa to the sausage mixture and toss until well combined.  Set aside.

Place the pepper halves in a glass or ceramic baking dish large enough so they are not crowded.  The dish should be lightly greased with olive oil.

Divide the sausage mixture amongst the four halves of each pepper, gently pressing the mixture down into each half.

Bake at 350 degrees for 45 minutes, or until peppers are beginning to soften and the top layer of quinoa is beginning to go golden brown.  Allow to stand for 2 minutes before serving.
Posted by msdanielleanne at 10:54